From Resplandy et al (conveniently already up on sci-hub):

Our result — which relies on high-precision O2 measurements dating back to 1991 — suggests that ocean warming is at the high end of previous estimates, with implications for policy- relevant measurements of the Earth response to climate change, such as climate sensitivity to greenhouse gases

But how big are these implications? As it happens I was just playing around with 20th century energy balance estimates of the climate sensitivity, so I could easily plug in the new number. My calc is based on a number of rough estimates so is not intended to be definitive but should show the general effect fairly realistically.

I was previously using the Johnson et al 2016 estimate of ocean heat uptake which is 0.68W/m^2 (on a global mean basis). Resplandy et al raise this value to 0.83. Their paper presents their value as a rather more substantial increase by comparing to an older value that the IPCC apparently gave.

Plugging the numbers in to a standard energy balance approximation we get the following estimates for the equilibrium sensitivity: 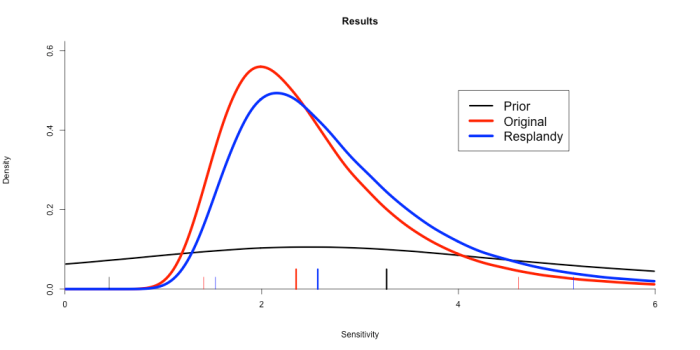 This simple calculation has a (now) well-known flaw that tends to bias the results low, though how low is up for debate (it’s the so-called “pattern effect” or you might know it as the difference between effective and equilibrium sensitivity). I used my preferred Cauchy prior from this old paper. It has a location parameter of 2.5 and a scale factor of 3 (meaning it should have a median of 2.5 and interquartile range of -0.5 – 5.5, though it’s truncated here at 0 and 10 for convenience). The old calculation based on Johnson et al’s ocean heat uptake has a median of  2.35C with a 5-95% range of 1.41 – 4.61C. The new estimate raises this to a median of 2.57C with a range of 1.53 – 5.17C. So, about 0.1C on the bottom end and 0.5C on the top end, which may not be the impression the manuscript gives. The medians and ranges are shown with the tick marks. The calculation goes up to 10C but I truncated the plot at 6C (and thus cut off the prior’s 95% limit) for clarity.

Another caveat in my calculation is that the new paper’s main result is based on a longer time interval going back to 1991, if the ocean heat uptake has been accelerating then that would imply a larger increment to the Johnson et al figure (which relates to a more recent period) and thus a larger effect. But even so it’s an incremental change, and not earth-shattering. As one might expect for such a well-studied phenomenon.