jules had a a 7:30 breakfast meeting today which didn’t seem very civilised to me. But it looks like it was worth getting up for. 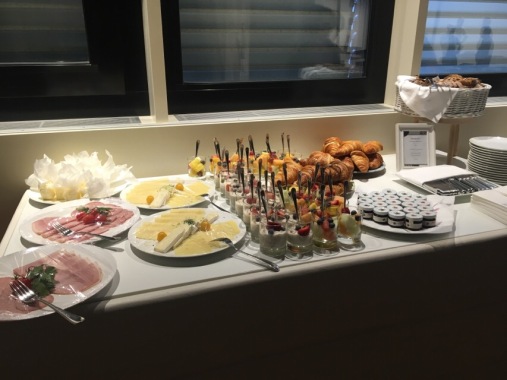 A perk of being Executive Editor, but very little recompense really for the hours of work she puts into running GMD. I am pleased to confirm that the croissant that she smuggled out for me was excellent.

The day proper started with general paleo data/modelling stuff in a session that jules was co-convening. This was a little thin this year, especially on the modelling front, probably due to the forthcoming CMIP/PMIP experiments which will be underway around the world but which are not yet ready to report on. I probably should have paid more attention but was distracted by croissant crumbs.

Today’s free lunch was at the CL (climate) Division meeting. All seems to be sailing on fairly smoothly though the EGU is heading towards full capacity of the meeting venue and it’s not clear how best to address this. One new policy initiative that jules and I are not particularly keen on is the imposition of a limit to one submission per person as first author (a second submission would be allowed if you are actually invited to talk, but that’s fairly rare). We have 4 between us this year and rarely if ever have come with a bare one each – though to be fair last time we came 2 years ago jules had a invited talk and we only submitted one more one more each on top of that, so it’s not always going to be a huge problem. Also, the limit could be easily evaded by author padding which seems like an open invitation to ethically dubious behaviour. Another issue that generated some discussion is the prevalence of stale pale males in the higher echelons of the division hierarchy. Hard to blame the maleness of the president in particular on any institutional bias though, since they are elected by the members and there have certainly been female candidates for this position. The medal winners on the other hand…enough said.

Amazingly, the weather/climate sessions contained yet more discussion of the good performance of the ensemble mean. Apparently its good performance (relative to ensemble members) is due to nonlinear filtering? Not really, it’s just Euclidean geometry and simple algebra. Ho hum. See these three posts and the associated paper for more details. Not much point writing it down if people aren’t going to read it though! There was also “decadal” forecasting of the next 2-5 years but to be fair someone had actually done a full 10. It doesn’t work, but at least they tried.

A PICO session on the use of econometric methods in climate science is the sort of thing I really appreciate being able to see at the EGU. Nothing stood out as particularly important but it covered a wide range of methods and applications. I must admit I was a little bit suspicious of someone fitting an inherently unstable time series model to 20 years of ice sheet volume data and concluding as a result that the ice sheets are terribly unstable though 🙂 His argument was that the unstable model fitted the data better than any simpler version. My counter-argument was that we’ve actually had 10,000 years of stable ice sheets prior to the reduction in recent decades! I think the underlying problem is that the recent accelerated loss is externally forced which his model doesn’t explicitly account for. This is a typical failure of econometric methods in my view, that they do not always take account of background knowledge that is implicit in the fundamental physics of the systems they are attempting to model. All good fun stuff though. Last thing today was paleo posters (from the morning session) which we are not contributing to this time round. Lots of people to meet and chat to, after not attending last year.