British trains may be slow and prone to delay, but they are the main reason that British people are so ingenious. Harry Potter was famously dreamed up by JK Rowling on a train. And similarly, it was on a train that the idea of the earth system model we now called GENIE came into the  mind of JG Shepherd. JGS then (1998/1999) started to try to get people interested and gathered a group of apparently bright early career researchers (which means none of them had permanent jobs) from around the universities and NERC research laboratories. James and I were the two representatives from the Proudman Oceanographic Laboratory, and this was how we started the move into climate research. Proposals for funding were made, but none of the actual workers, with their unstable positions were eligible to be on the grant, and despite its list of many illustrious principal investigators, it wasn’t funded. The early career researchers dispersed around the world, to USA, Switzerland and us to Japan (a couple also stayed in the UK). Curiously, however, the work on the model (then called GOLDSTEIN) continued, and by the mid-noughties we were all churning out lots of papers based on it. After this, it got some funding through something called “e-science” which was all to do with computer science and internet wormholes and stuff. The money mostly seemed to fund computer scientists to do strange things that we didn’t understand to the code, while the rest of us just carried in working with the model without any extra funds. It was at this point that the model was rebranded as GENIE.

Also in the mid-noughties, it was through the GENIE emailing list that several of us decided it would be a good idea to start a journal devoted to descriptions of models. I suppose as new interlopers in the climate modelling world we were shocked by what we found, in a way that someone “nurtured” into the dark arts of modelling through their PhD probably wouldn’t be. We found that not only were models not described in journals in a way that would make them anything close to being able to be reproduced by someone else, but also that when we tried to publish the fruits of our hard labour of model development, the papers got rejected, or received severe instruction to cut the amount of model description and increase the results. As basic scientists, used to properly explaining our scientific methods in our papers, we were horrified! Thus was the revolution started that became the journal Geoscientific Model Development. I don’t know if it is universal, but certainly bosses these days are much less likely to encourage their modellers to sweep their work under the carpet (= shoddy internal documents). Instead they encourage them to write papers.

For reasons no one can fully comprehend, Andy Ridgwell recently decided to hold a GENIE party to celebrate the past present and future of GENIE. He said it was something to do with 10 years of GENIE, but it is many more years than that since JGS got us all together. The meeting was held last week in a nice old building in Bristol University. Almost all the original ones were there (I think only James was missing) and all except me and James now have very important jobs (mostly full professors) at UK universities. I think James and I just got spoiled by having so much fun in Japan so long!  Although about half the people in the room were female I was surprised to notice that I was the only female one of the originals! So there are certainly more women in climate science these days. But I find it really concerning that there are still so few women at the higher levels.

The day included talks on the history of GOLDSTEIN and GENIE, and ongoing work in the biogeochemistry and physics fields. It was really interesting to me, as in around 2007 we gradually stopped using GENIE and started using the MIROC GCM and then the CMIP ensemble. There was also a very entertaining talk by Gethin Williams who is a computer scientist at Bristol Uni. He pointed out that GENIE was efficient neither in terms of vectorisation nor parallelisation and while apparent computer speed continues to increase at roughly Moores Law pace, GENIE still runs as slowly as it did in around 2005. (ROFL!!!) I was quite surprised, and really wondered what all the e-science funding had been for, as this kind of optimisation was really important at our old laboratory in Japan (due partly to the requirement to run models efficiently on the earth simulator). James loves making efficient algorithms, and even knows how parallelise code, so has offered his services, should anyone in the GENIE team ever be able to afford him.

I took quite a few pictures. I wanted to document the ravages of time upon the GENIE men. Unfortunately most of them are active sorts of people, and don’t really look much older! I ended up taking photos of all the people who gave talks as well as the oldies, and there’s a whole album on flickr: CLICK HERE  to view. 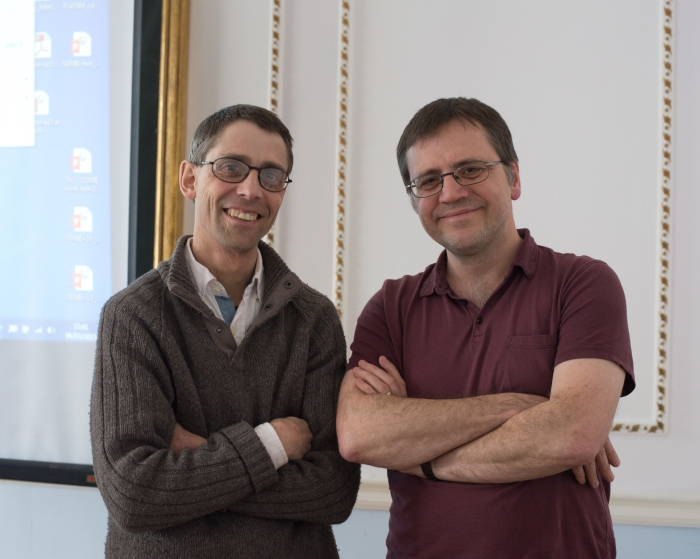